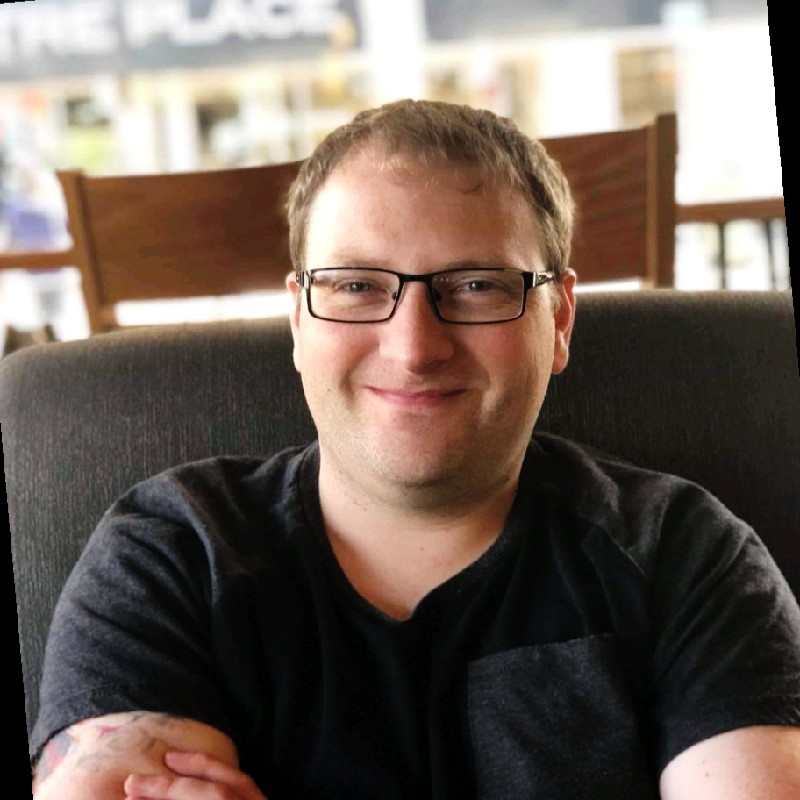 WebJEA allows you to build web forms for any PowerShell script dynamically. WebJEA automatically parses the script at page load for description, parameters and validation, then dynamically builds a form to take input and display formatted output!

The main goals for WebJEA:

Because WebJEA is simply a Self-Service Portal for PowerShell scripts, anything you can script with PowerShell you can run through the Portal! Opening a lot of opportunities for automation without having to learn third party automation toolsets! Anyone who knows PowerShell can use it! Each script can be locked down to specific users and AD groups!

You can read more about WebJEA directly on the GitHub page: https://github.com/markdomansky/WebJEA.

This guide will concentrate on setting up WebJEA for self-service Azure VM management. However, WebJEA can be used to enable much more than what this blog article covers, from things such as new user onboarding, to resource creation. 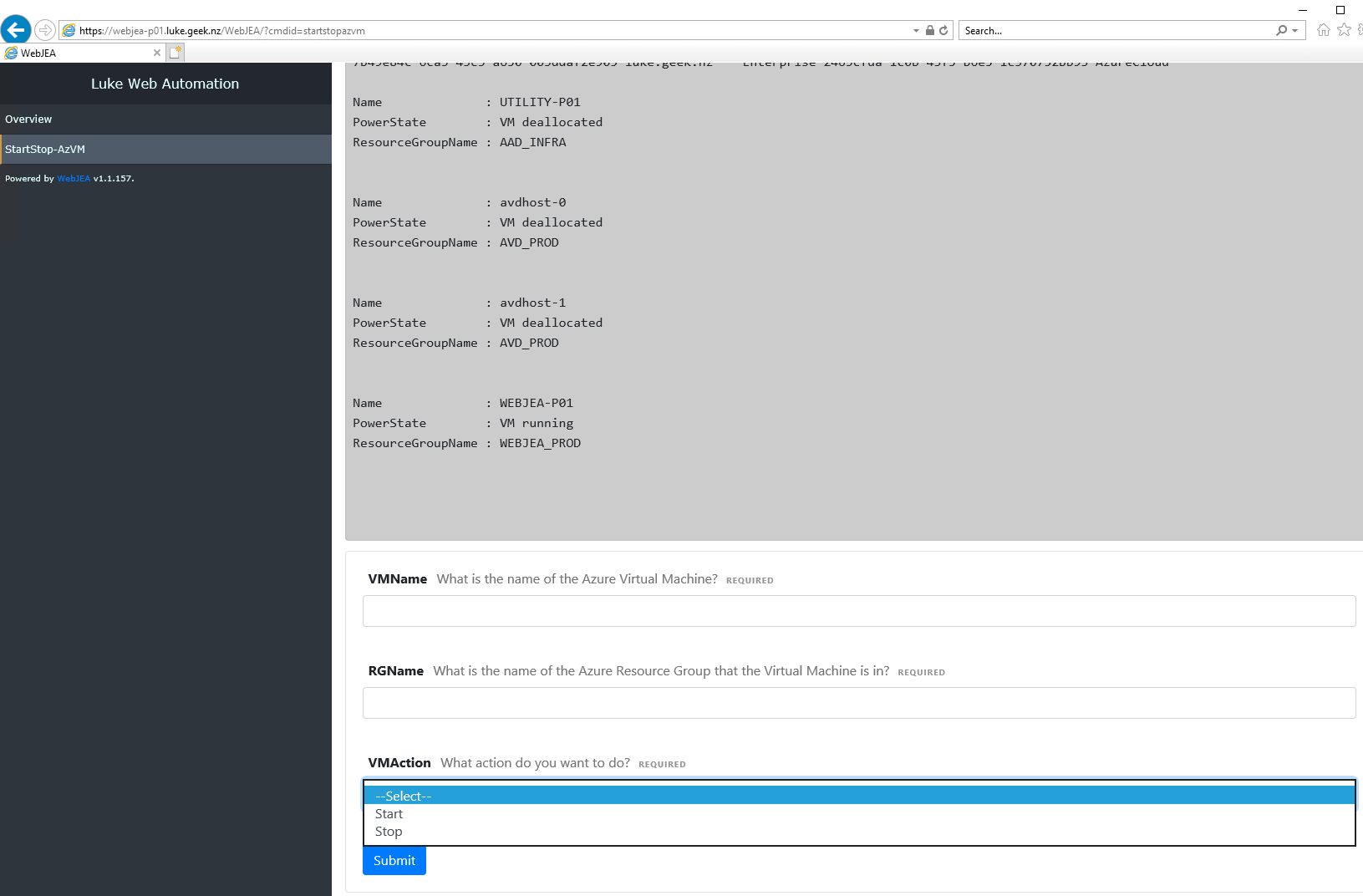 We will use a Windows Server 2019, running in Microsoft Azure, to run WebJEA from.

This server is running: Windows Server 2019 Datacenter and is part of my Active Directory domain; I’ve also created a service account called: webjea_services.

Once we have a Windows Server, now it’s time to set up WebJEA!

If you already have a certificate you can use, skip this step. In the case of this guide, we are going to use a self-signed certificate.

Open PowerShell ISE as Administrator, and after replacing the DNS name to suit your own environment, run the following to create the Root CA and Self-Signed certificate:

Now that the Root CA is created and trusted, we want to create the actual self-signed certificate:

This is the account we will use to run WebJEA under; it can be a normal Active Directory user account if you feel more comfortable or want to assign permissions to.

I am using a normal AD (Active Directory) service account in this guide because I am using Azure Active Directory Domain Services as my Domain Controller, and GMSA is not currently supported. I have also seen some scripts require the ability to create and read user-specific files. However, it’s always good to follow best practices where possible.

Add the WebJEAAdmins group to the Administrators group of your WebJEA server.

Extract it, and you should have 2 files and 2 folders:

WebJEA uses PowerShell DSC (Desired State Configuration) to set up a lot of the setup.

DSC will do the following for us:

Even though most of the work will be automated for us by Desired State Configuration, we have to do some configurations to work in our environment.

I am not using a Group Managed Service Account. Instead, I will use a normal AD account as a service account (i.e. webjea_services), but if you use a GMSA, you need to put the username in the AppPoolUserName; no credentials are needed (make sure the GMSA has access to the server).

Change the following variables to suit your setup; in my case, I have moved WebJEA resources to their own folder, so it’s not sitting directly on the OS drive, but until its own Folder.

If you just opened up PowerShell ISE, you may notice that you are actually in C:\Windows\System32, so it won’t be able to find the script to run; you can either change the script to point directly to the file location, or you can change the directory you are into to match the files, in my case in the Script pane I run the following:

Now run the script and wait.

If you get an error saying that the script is not digitally signed, run the following in the script pane:

This is because the PowerShell execution policy hasn’t been set; depending on the scripts you are running, you may have to update the execution policy for the entire system, but for now, we will set it to Bypass for this process only, now re-run the script again, you should see DSC kick-off and start your configuration and setup of IIS and the WebJEA site.

You should also see the files/folders starting to be created!

Once DSC has been completed, your server should now be running IIS and the WebJEA site

To add the IIS Management Tool, this is not required but will help you manage IIS, run the following PowerShell cmdlet:

Open an Internet Browser and navigate to (your equivalent of): https://webjea-p01.luke.geek.nz/WebJEA. 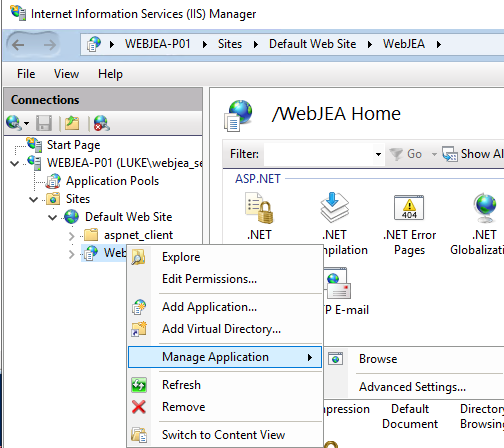 If successful, you should get a username and password prompt: 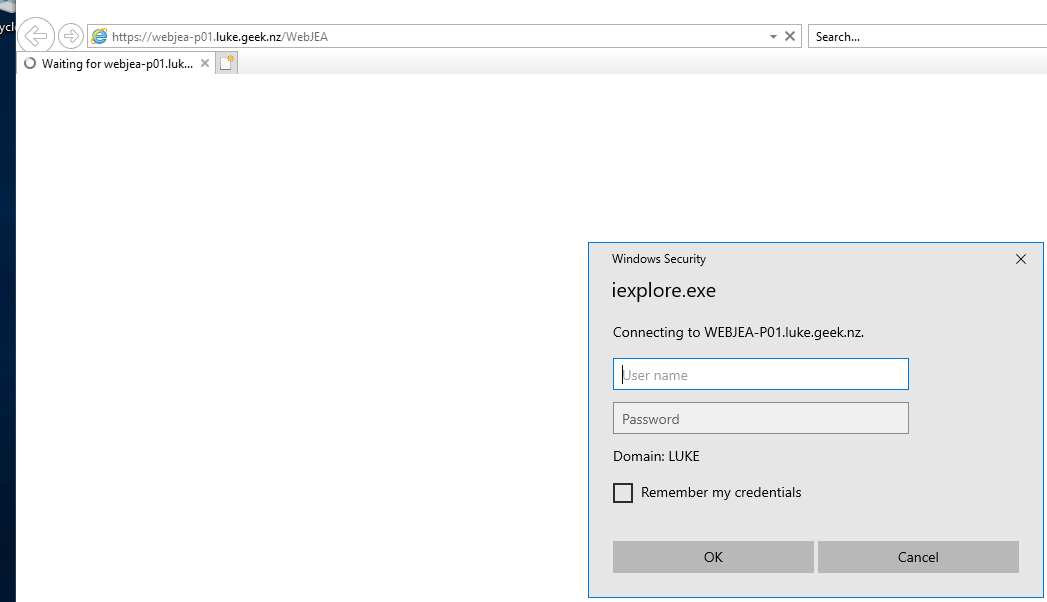 That’s normal - it means you haven’t been given access and now need to configure it.

Now that WebJEA has been set up, it is time to configure it; the first thing we need to do is create a Group for WebJEA admins (see all scripts).

Create an Active Directory group for:

Navigate to your WebJEA scripts folder; in my case, I set it up under c:\WebJEA\Scripts:

Before we go any further, take a Backup of the config.json file, rename it to “config.bak”.

I recommend using Visual Studio Code to edit the config.json to help avoid any syntax issues.

Now right click config.json and open it to edit

This file is the glue that holds WebJEA together.

We are going to make a few edits:

Note the: \\ for each path that is required. If you get a syntax error when attempting to load the WebJEA webpage, this is most likely missing.

Save the config file and relaunch the WebJEA webpage. It should now load without prompting for a username and password.

Set the PowerShell execution policy on the machine to Unrestricted so that you can run any PowerShell scripts on it:

If you get an: AuthorizationManager check failed error, it is because the PowerShell scripts are still in a blocked state from being downloaded from the internet, run the following command to unblock them, then refresh the WebJEA webpage:

You now have a base WebJEA install! By default, WebJEA comes with 2 PowerShell files:

You may have noticed these in the config.json file; WebJEA has actually run the overview.ps1 file as soon as the page loads, so you can have scripts run before running another one, which is handy when you need to know the current state of something before taking action.

The validate.ps1 script is an excellent resource to check out the parameter types used to generate the forms.

Now that we have a working WebJEA install, it’s time to set up the Azure VM Start/Stop script for this demo.

On the WebJEA server, we need to install the Azure PowerShell modules, run the following in Powershell as Administrator:

Once the Az PowerShell modules are installed, we need to set a Service Principal for the PowerShell script to connect to Azure to manage our Virtual Machines.

Run the following PowerShell cmdlet to connect to Azure:

Now that we are connected to Azure, we now need to create the SPN, run the following:

Now you have created an SPN called: WebJEA-AzureResourceCreator. We now need to grab the Tenant ID, run the following:

Now that we have the SPN and Tenant ID, it’s time to test connectivity.

To retrieve the Secret, created in the SPN and add it to the String.

Now run the snippet, and you should be successfully connected to Azure.

One of the features of WebJEA is the ability to run scripts on page load. So, we will get the current Power State of our Azure VMs, in the WebJEA scripts directory to create a new PS1 file called: Get-VM.ps1.

Add the following script to it:

Add the following script to it:

Now that the scripts have been created, it’s time to add them to WebJEA to use.

Navigate to your scripts file and make a backup of the config.json file, then edit: config.json

So your config.json should look similar to:

Now that the scripts have been created open the WebJEA webpage.

Click on the StartStop-AzVM page (it may take a few seconds to load, as it is running the Get-VM script). You should be greeted by a window similar to below:

Congratulations, you have now set up WebJEA and can Start/Stop any Azure Virtual Machines using self-service!

Benefits to using the Microsoft Azure Cloud to host your Infrastructure

Cloud computing offers many benefits, from your traditional on-premises infrastructure, ecosystems such as Microsoft Azure, have an underlying fabric built f...

I ran into a weird issue, troubleshooting an ‘Always On VPN’ installation running off Windows Server 2019, the clients were getting the following error in th...

Update-AdmPwdAdSchema - The requested attribute does not exist

Are you attempting to update the Active Directory Schema for LAPS (Local Administrator Password Solution) and keep getting the error below? 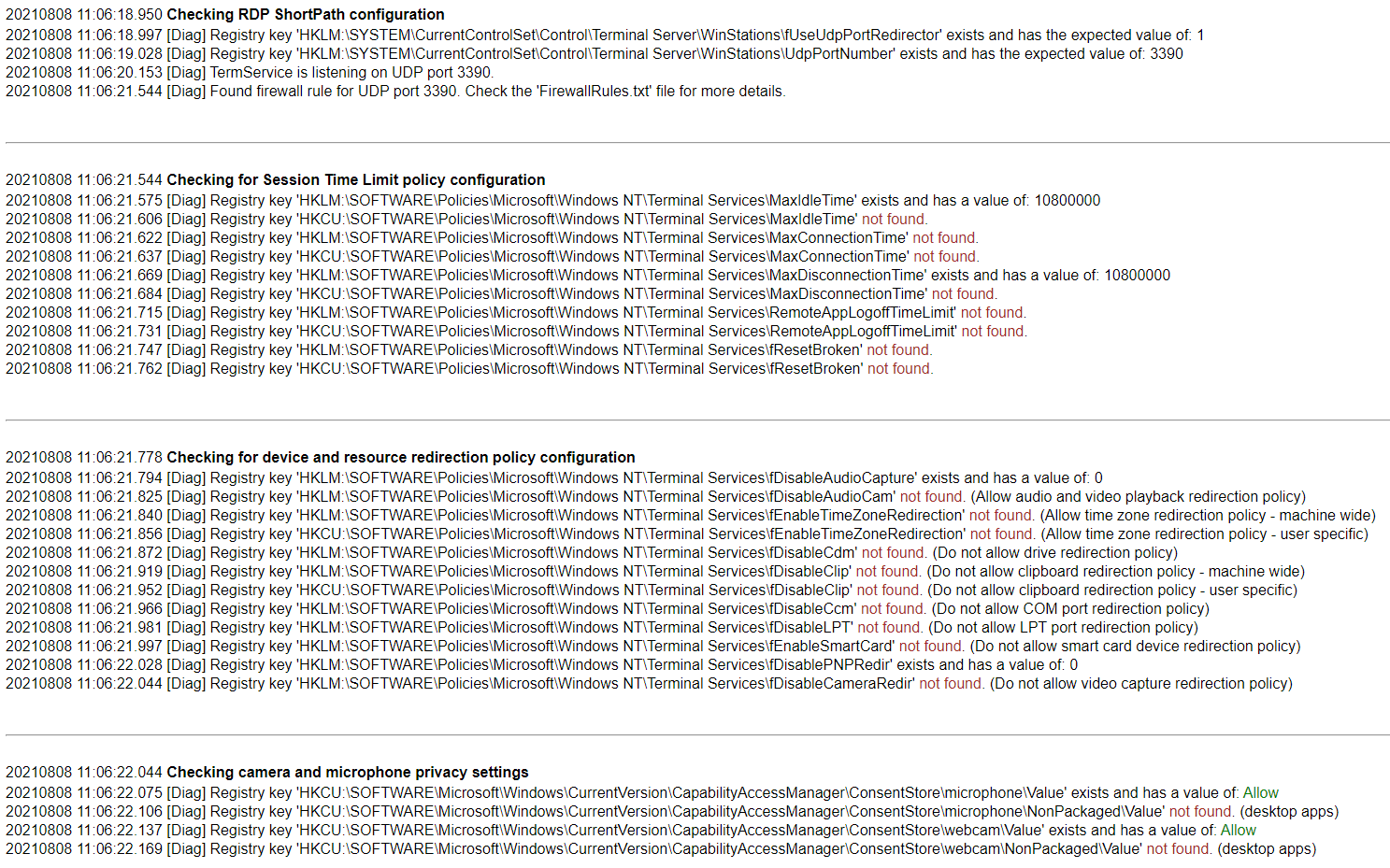 AVD-Collect is a handy PowerShell script created by Microsoft Customer Support Services to assist with troubleshooting and resolving issues with Azure Virtua...